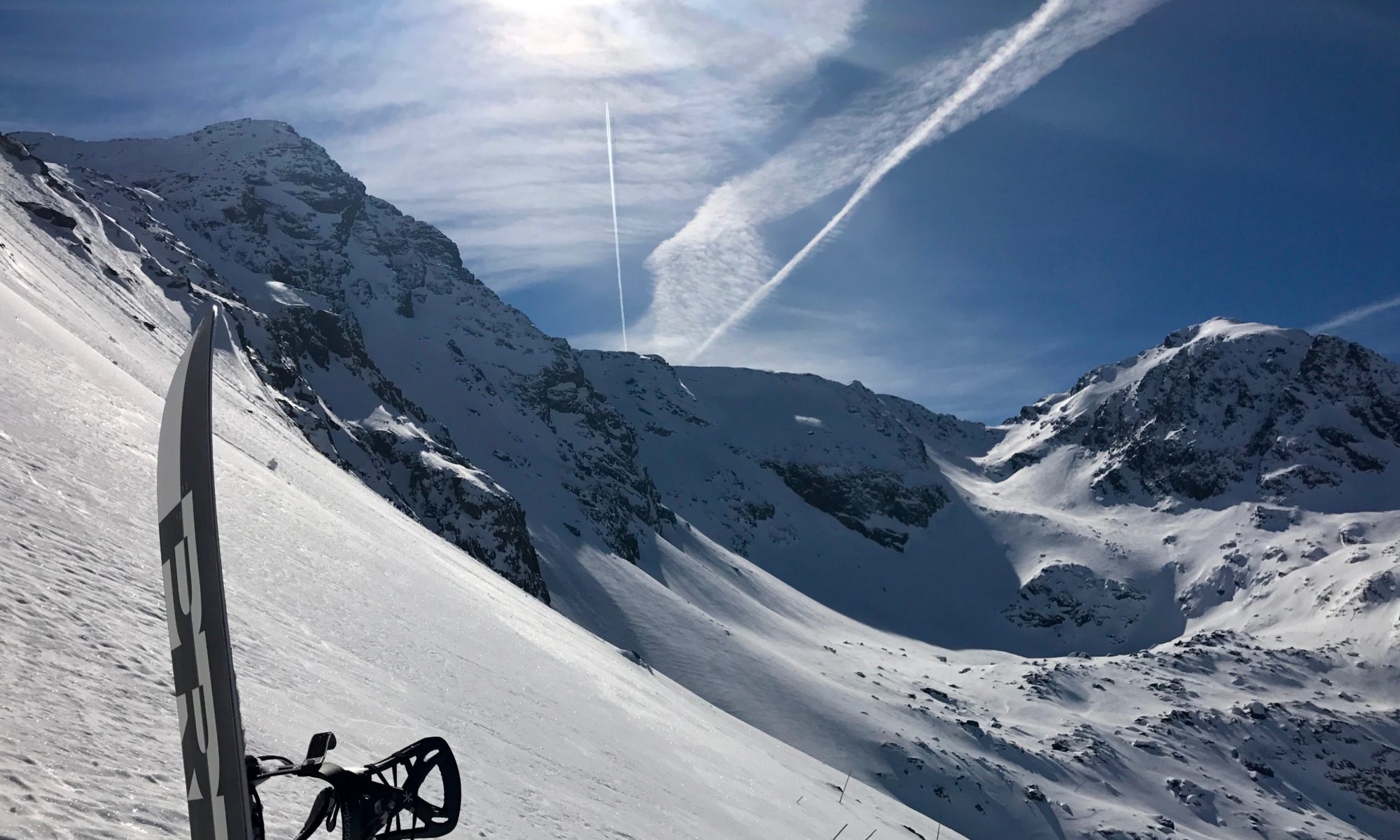 Splitboarding… I’ve long dreamed about exploring and riding in the back country with a snowboard.

The lure of riding powder

Riding soft, fluffy un-tracked snow is one of my favourite things to do: Surrounded by epic nature; the anticipation before dropping in; heart in mouth as you commit to the fall and if it’s really steep – pure fear; then speed; exhilaration after the first turn when you know everything is going to be OK. Then the thrills from laying back, arm out, hammering through the remaining turns… Totally consuming, incredible sensations and a lot of excitement…

I don’t have a snowmobile…

The problem is that getting to ride soft, fluffy lovelyness is not that easy. The offpiste snow in resort is usually tracked out within hours of a fresh dump, or minutes if you’re in somewhere really competitive like Chamonix. Heliskiing is costly. We don’t seem to do Catskiing in Europe. I’m not good enough to kite snowboard and I don’t know many people with a snowmobile. So the only viable way to get into the back country is leg power. For skiers this is fairly straight forward, but for snowboarders… It’s not so easy to go up on a snowboard.

How to walk uphill on a Snowboard

Enter Split Boards. A snowboard literally cut in half down the middle. Going up it’s skis, going down… It’s a snowboard.  I first set eyes on a split board on the Prior website about 7 or 8 years ago and immediately started dreaming about the possibilities. Since then I’ve not had a great deal of time for snowboarding and last season I was recovering from an injury. So in early 2013 I resolved to ensure that the following season would be the start of my splitboarding adventures.

After a long and what felt like a rather epic battle to pull together all the necessary gear last year and early 2014, I finally managed to get out into the mountains today for my first Splitboarding experience.

I let the best weather pass by as I drank tea and phaffed around at home, double checking the board set-up, cutting skins to size, packing unusual stuff like ski poles and making sure I had plenty of layers in my pack.

For this first outing on totally new equipment, I chose to walk up the side of a piste, thinking that if anything didn’t work or I had forgotten something, I wouldn’t be stuck in the middle of nowhere. Stepping onto the ‘board’ in ski mode had me feeling like a bit of a beginner and I was rather self conscious as I walked away from the lift area. Uncertainty quickly gave way to thoughts about the effort required…

The actual process of moving uphill seemed fairly intuitive – I quickly learned that the skins give a lot of grip and if you keep your weight centred over the bindings, you can walk directly up very steep snow. I tried to slide my ski rather than pick it up and I used smaller strides to keep my heart rate from going off the scale. I found that a slow, steady rhythm with stops every now and then meant I was able to attain my target. During my walk up, a real ski touring person came past me about two thirds of the way up and my competitive nature meant that I kept him within sight until I stopped at my zenith ready for the ride down.

Nothing can stop me

The change over from skis to snowboard wasn’t that hard. It would have been easier had it not been blowing snow into my face at about 40km/h. The secret was getting all of the snow and ice from the ride mode interface. With that clear, I was able eventually to press home the binding locker, but even then it was pretty hard. Especially with cold fingers. I’m sure with practice and once everything has loosened up a bit, it will be easier. It was a bit weird strapping in because the bindings and straps felt very minimal – my first few turns where in poor visibility on bad snow and I was worried about whether everything would stay together OK. It did!

On the piste, the response felt quite a bit better than my old Cartel bindings – maybe it was my imagination and the fact that the split board is a bit smaller than the board I’ve been riding recently and therefore more eager to turn. I did feel like I had to lay back a bit – more of a powder stance and after a few tentative turns, I found I was able to transmit quite a lot of energy into the board. I soon developed plenty of confidence in the set-up and on my second run down, I was easily able to rail the board, putting in some big, fast turns without any worries.